Leafs Back In Action, Lose To Isles: Leafs 4 Islanders 5 (OT) 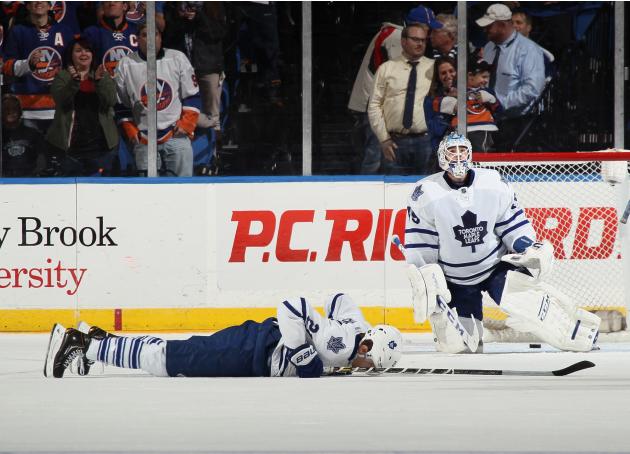 The Leafs lose a wild one in their first game back from the Olympic break. In the 1st, Phil Kessel continued where he left off and scored the opening goal for his 32nd of the season. Later in the period, the Isles’ Michael Grabner capitalized twice on the same penalty kill. Both goals were bad giveaways and could’ve been easily avoided. Nothing really happened in the 2nd other than the Gleason, Boulton fight. Gleason got knocked down pretty quick by the heavyweight Boulton and infidelity lost that bout. In the third period The floodgates opened after Paul Ranger’s garbage goal. Dion Phanuef and Joffrey Lupul scored for the Leafs, while Anders Lee tallied both goals for New York. In overtime, JVR failed to clear the puck, gave it away to Lubomir Visnovsky in front, pucks in the back of the net, game over.

It has been a reoccurring theme this season with Jonathan Bernier. Keep your team in the game while some unreal saves, but let in some really weak goals in the process. From what I can remember off the top of my head, Bernier has let in some baaaad goals against Carolina (full ice goal), Islanders (de Haan goal), Canucks (Kesler shot), Islanders (Grabner goal), and I know there are more that I’m forgetting. The point is he has got to clean that area up in his game as well as his rebound control. He’s very good at controlling hard shots but for some reason has trouble holding onto and clearing dump-ins and flip shots. The Frans Neilsen goal from earlier this season is a great example of what I’m talking about.

After Kessel, Bozak, JVR, Lupul, Kadri, and Raymond, there is no apparent offense from this team. David Clarkson and Nikoali Kulemin especially have got to step it up going into playoffs. It may change once a natural center like Dave Bolland returns, but they seemed almost invisible last night. On that note, why was Kulemin playing center and not Trevor Smith? That didn’t make to much sense, until Smith got only 6:07 in ice time. My hunch is he still hasn’t fully recovered from the hand injury he suffered against Florida earlier this season.

Next up is the Habs. This is a huge game for both teams in the Atlantic Division race. This game could determine who eventually is good enough for a Top 3 spot in the Atlantic. Hopefully James Reimer will start this one.

Follow my blog for more hockey analysis, & Leafs Daily posts by clicking the logo below.

I'm a young sportswriter covering the Toronto Maple Leafs of the NHL.

← Click my logo for more hockey analysis & more Leafs Daily posts from SportsBlog.com I'm a young sportswriter covering the Toronto Maple Leafs of the NHL. Subscribe to me on YouTube at: YouTube.com/TheHockeyStuff